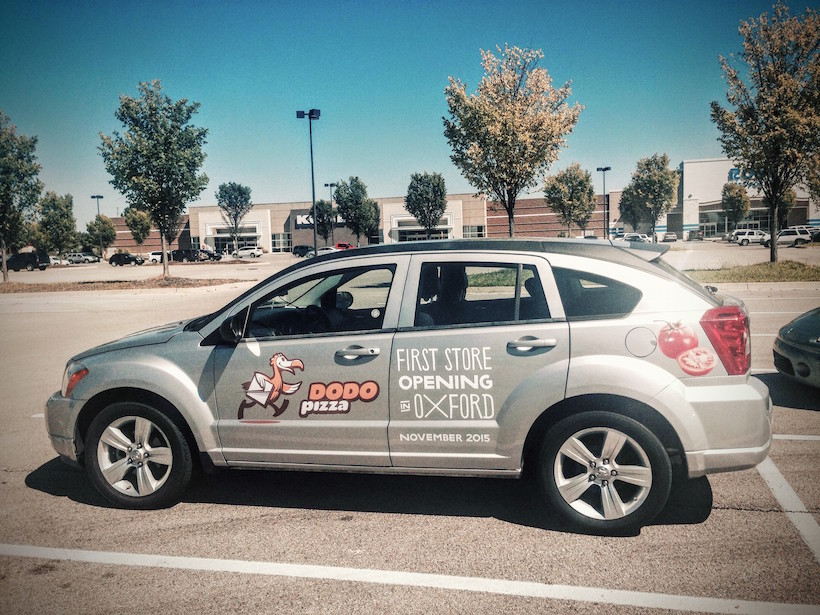 “We have a problem,” I told my colleagues one day during our regular Skype call, which usually connects four people, three cities, and two continents to help us keep everyone on track with our Oxford project. “We rented a place for Dodo Pizza, but there is a fair chance that we won’t get a permit to open a pizzeria there.”

It was as bad and ridiculous as it sounds. In signing the deal for the Red House, we overlooked one detail that could potentially destroy all our hopes of opening a pizzeria in Oxford.

If you want to open a restaurant or an office, you have to be sure that there’s enough parking for your customers or employees. That’s the law in the state of Mississippi, and I have to admit it’s a good one.

In Russia, we don’t have such a law. As a result, cars fill any space they can, even the lawns. Parking becomes a morbid issue. So we were happy to see some order with this issue in Oxford, and we reserved eight parking spaces for us in the deal—exactly what we needed. We thought that we were good with parking, so we signed the papers for the Red House.

After a visit to City Hall, we realized that we actually shared parking with the nearby office building, and now THEY didn’t have enough spaces. But since both buildings belonged to the same landlord and we were new tenants there, it was OUR problem.

Then the madness started. Calls. Arguments. Research. Negotiation. Despair. Hope. So we had a lot of fun, as it’s supposed to be when you open a pizzeria. :)

When you ask for a permit at City Hall, there are two possibilities. If your situation is straightforward, you just get it. If there are questions, you go to public hearings. Ours was scheduled for the 8th of August. And we had to build a strong case before that date arrived.

I started to dig in three directions simultaneously. First, we were opening a delivery with takeout, so we could argue that we needed less spaces than a restaurant. Second, the office building wasn’t populated that much, and in reality our neighbors had enough spaces even after we took ours. Third, there were trees, and I had a thought that maybe we could cut down some of them and expand the lot. This all brought me to the library, where I was trying to find out what kinds of trees we had. Were they cuttable?

All that kicked up a fuss. We were in constant consultations with City Hall, our landlords, other tenants, lawyers, architects, and builders.

I had a feeling that our landlord was regretting that he'd signed the deal with us. :)

At the same time, I saw that our chances to win the hearings were slim. The law is the law, and you can't get around it.

But if we failed during public hearings, opening in 2015 would no longer be an option. Since we already had the deal signed, we couldn't look for other opportunities. And honestly, I didn't believe that we could have found another location in Oxford—at least as good as the Red House was.

We allowed ourselves to think about moving to another town in the US and starting all over again. Then one day I was passing by the Red House and saw a truck parked beside the second building. Its doors were open, and loading was in progress.

Sometimes the outcome of our best effort is determined by very small events. It’s almost painful to realize how tiny that force can be.

If I hadn't passed by the Red House that night, we probably would have lost the case during the hearings and would have been forced to leave the town. But it turned out that wasn't our destiny.

Looking at the truck, I had a feeling that something was wrong, since it was an office—not a storage facility. I made some calls and found out that more than half of the office building was used as a warehouse.

Nobody thought that this information was important to share before. But I'd spent many hours with the Building Department at City Hall trying to figure out this parking thing. Thus, I knew that warehouses needed much fewer parking spaces—by law.

The rest is history. I asked our landlord to measure the exact areas of the offices and warehouse, crunched the numbers, and learned that there were enough spaces for everyone. I shared my discovery with the Building Department. The next day I got a call—you’re right, everything is fine with the parking and you don't need to wait for the public hearings!

Good luck in Oxford, Dodo Pizza. Now the Red House is your home.