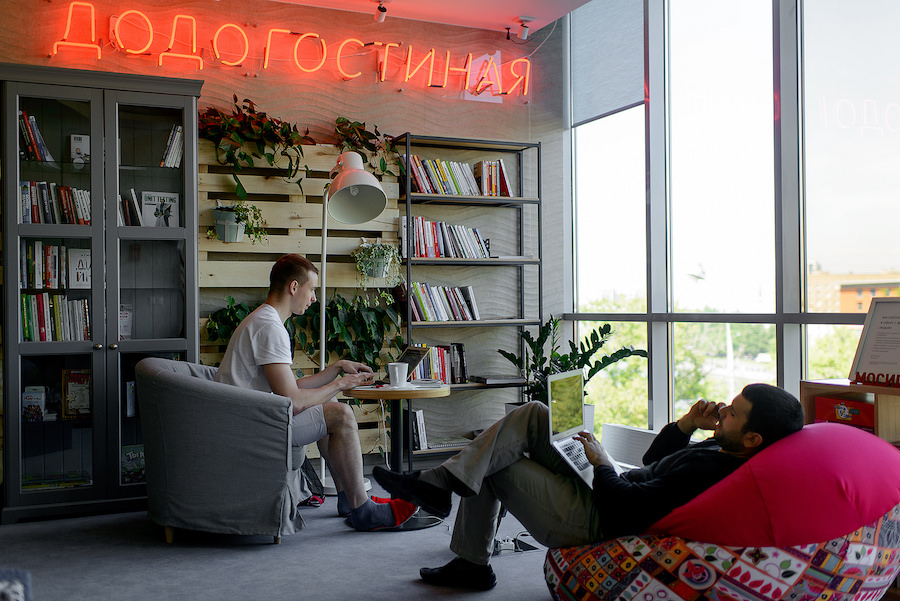 Fat lazy cats. The more successful you get, the more likely you will turn into one of them.

Successful managers think that their accomplishments are proof that they are much smarter than others.

They reckon they deserve some peace after everything they have achieved.

They believe that finally, when they are on the top, they are safe.

Big mistake. In a cruel business world, nobody is ever safe. Ask the guys from Nokia, Borders, or Chipotle.

What should you do on a management level to motivate your team, preserve a healthy organizational culture, and prevent your people from becoming these fat lazy cats that sleep all day long and lose their turf to the young and starving?

For Dodo Pizza, the question is far from theoretical.

Last year, our friends from Domino’s built 41 pizza shops in Russia. Papa John’s—40. We increased our Russian chain by 101 pizzerias (and our global chain—by 126).

So we managed to secure our leadership in the pizza business in our home market. And we are also the number one pizza chain in Kazakhstan.

Last year, we opened a new office in Russia’s capital with a lounge zone and an orange juicer in the kitchen. It’s a long way from the early years when the team consisted of a few enthusiasts who had to sit on cans of pizza sauce because their office couldn’t offer them proper chairs.

But make no mistake: it’s not a good time for us to give ourselves a break.

Global pizza companies are breathing down our neck

Last summer, DP Eurasia, which is a Domino’s Pizza franchise holder in a few countries, declared that it would be opening 90 pizzerias every year from now on—and there is no question that most of them will be in Russia, since it’s the biggest market in their portfolio.

Papa John’s now holds second place in our home country, and it looks like the green-and-red team won’t give up its turf to Domino’s without a fight.

Meanwhile, we’ve already launched our first pizza shops in China, the US, and England. But these markets are hard to crack and need tons of work before we can say that we have a stable, growing business there.

Our own IT system that manages all our pizzerias is still a work in progress—we must bolster it for scaling and add new features at the same time.

Finally, Dodo Pizza grew from zero to 280 locations in just six years. Now we need to rethink and completely rebuild how the company is managed—without losing our pace of growth.

We must learn how to be big and motivated, keep positive organizational culture, and effectively run a $100-million company while remaining agile and street-wise.

Not that long ago, Dodo Pizza was a startup.

We didn’t have that many procedures to follow. Didn’t know much and learned on the go. Worked insane hours.

Our success was secured by a team of friends and enthusiasts who didn’t need KPIs to pull off a challenging project.

We just created opportunities and let people act on their own.

So, what should we do to preserve this culture and push the team further at the same time? We experienced reasonable business growing pains. We have gotten older. Some of us maybe feel worn out. Some are appalled by the new challenges. But we’ve got work to do.

This was the question that Dodo Pizza founder and CEO Fyodor Ovchinnikov brought up last Friday during a New Year’s celebration at our headquarters (as a retail company, we always celebrate later than the rest of the world—after all the fun is over).

And Fyodor introduced two possible solutions to the team.

Fyodor admitted that at first, he contemplated the idea of setting up some evaluation system to propel team motivation, but after a while ditched the idea entirely.

There is always a certain degree of uncertainty in business that makes it almost impossible to accurately calculate a person’s contribution. You can work your fingers to the bone and have no progress because of the nature of the task in question. And vice versa.

So instead of proposing any kind of KPI, Fyodor declared a cultural change: we all need to become much more uncompromising.

If we do want to build a globally successful company, we can’t allow ourselves to do sloppy work at any given moment.

Being uncompromising means being able to confront your colleagues and friends when you see that the team can do a better job—and to be just as demanding to yourself.

But how should we nurture this uncompromising culture? Fyodor believes that working in teams will help with that.

Wait, that makes no sense. Doesn’t everybody already work in teams?

Of course, we have teams at Dodo. But in many cases, their members work independently—as a bunch of individuals who belong to the same field of knowledge.

An SMM manager can sit next to a digital manager and they can both belong to the marketing team and even go to some meetings together, but they can still operate pretty much independently.

We need to arrange our work in a new way and make the members of our teams more connected and dependent on each other.

That way, each one of us will feel the pressure of keeping up with the others, which will spur everybody to always stay on top of their game.

For this to work, people will have to be less narrowly focused. They can’t do just one thing that nobody else at the company does.

We will lose some pace in the short term, no question, but if we see these politics through, it will pay off strategically.

You have reason to think that the solution for our team motivation is a bit vague at the moment. But this is a framework we will follow to transform the way Dodo Pizza works.

We’ll see how this will work out in reality and keep you posted.

Dodo Pizza’s ultimate goal is to build an enterprise that is half a retail chain, half an IT company, and it looks like nobody knows for sure how to manage such a business in the new digital era.

Let’s figure it out.

management
Stay as informed as our CFO
Sales and store count, year-over-year growth, P&L, and other key data of one of the world’s fastest-growing and most transparent pizza chains
Please review our privacy policy before subscribing