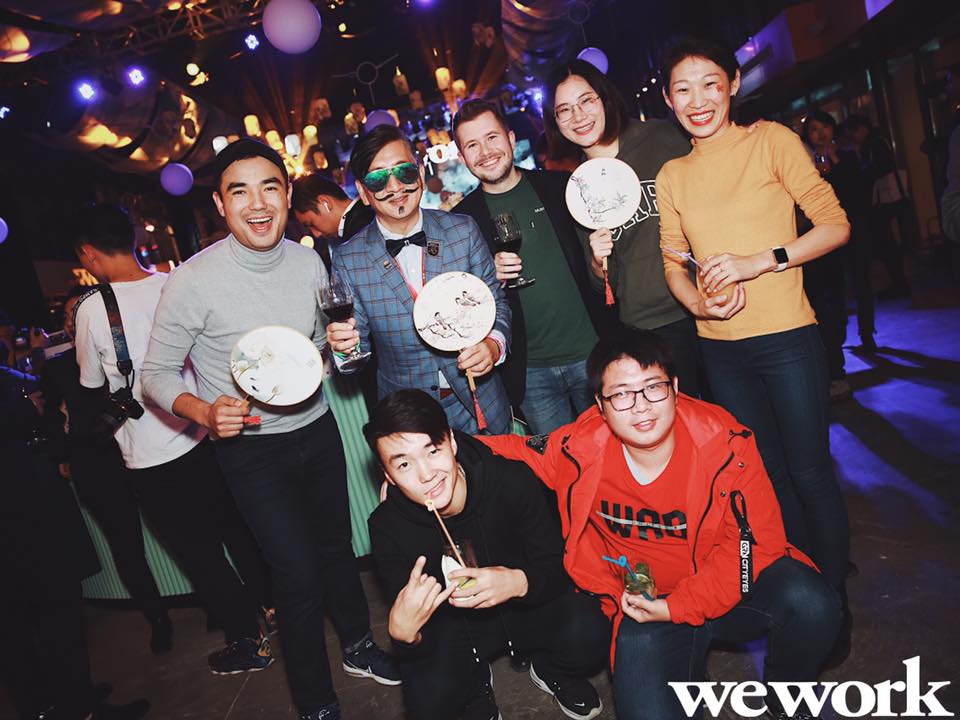 It so happens that Dodo Pizza has become one of the first residents of WeWork, an international coworking space in Hangzhou, China. WeWork opened here just recently, so half of it is still empty. I’ve been at WeWork for three days, and now I have first-hand knowledge of what they’re trying to create here. Most importantly, it’s a specific atmosphere that charges you with energy, and even three beer taps with unlimited refills don’t hamper your motivation. And, of course, WeWork creates community. Over the last three days, I’ve met a lot of interesting people here.

The scale and thoroughness of their work are astounding. Everything is made to be durable and American-style; they didn’t save money on anything, and you see it in every square inch of the interior finish. Ten thousand square meters of offices on two floors encircle a huge courtyard under a skylight—that’s where the communal area is located. There are kitchens, conference rooms large and small, and phone booths.

A few days ago, there was a great party at WeWork for the Hangzhou coworking space grand opening. The party budget was staggering. There was professional lighting, live music, various recreational activities, actors, entertainers, a whole team of chefs, and unlimited alcohol—cocktails, wine, and also oysters and hors d’oeuvres. Whatever guests wanted.

Christian Lee, the managing director of WeWork Asia, attended the opening. A Chinese ballet company appeared on stage, as well as an illusionist and a Chinese blues band. The director of the first Hangzhou coworking space said that WeWork never begrudged money on repairs and refurbishment, and one square meter of interior finish cost about $1000. So, WeWork has spent 10 million dollars on the refurbishment of rented premises, save furniture and the opening ceremony costs. I walked around and wondered how and when they were going to cover all these expenses.

The thoroughness and the scope of everything, from the coworking space interior to the party itself, were amazing indeed. And keep in mind that currently, WeWork is not profitable. They invest a lot of money in the future. No, I’m not a conspiracy theorist always looking for a catch. I believe in WeWork, and WeWork believes that offices and the approach to work itself will change dramatically, and then they will become the new Facebook and the investment will pay off, because they’ll be on top. No, they don’t want to make money off rent. It will never cover such investments. They want to create a new global business community.

Sometimes we believe in an idea that needs testing. We try to persuade investors. Sometimes we spend years and millions of dollars to prove that the idea will work.

Here they spent billions, and the scope of the game is the whole planet. What if it doesn’t work?

I’m amazed that these guys who invest billions of dollars have the guts and resources that allow them to stay in the game. This is new global capitalism, the stakes are billions, and the game is long term. This is a new global ecosystem.

For instance, Arab sheiks sell oil. Then they transfer billions of dollars to SoftBank in Japan. Japanese SoftBank invests billions of dollars in American WeWork. There is so much money in the world now that we need global projects, with the whole planet as a chessboard, and we’re playing blitz. Stakes become higher and higher. The higher the stakes, the greater the losses, and losses are inevitable. It’s just that we are not used to such figures.

This great game fascinates me. And I see that we ourselves have a completely different path. American venture capitalism is strong because it has opportunities and leverage to test any global idea fast, take the world by storm, invest in the very long run, or at least try.

But we were raised and now live under brutal constraints. From a business point of view, we’re creating a global company from a third world country (let’s be honest). We don’t have an attractive investment environment. We don’t have money for the long run. Not many people believe that you can build something global. And this is our strength. We are strong because the only way forward for us is to learn to live under constraints; being visionaries and dreamers, we have to be guerrilla fighters, to invent, dodge, stubbornly climb up mountains step by step, and work hard, thinking about today’s survival and long-term future at the exact same time. That’s why we are very strong. Therein lies our advantage. And it’s not worth it to complain that you weren’t born on the West Coast. It’s not that much of an advantage anyway.

The world is now global. Anybody who wants it and is persistent enough can learn English, move to California, and become a part of the system where survival is hard, yes, where only the best come out on top, but you can get leverage to move the earth. However, we’ve chosen another path. Or, maybe, it has chosen us :-) It’s an interesting path because there is so much unknown there. And then somebody will say, “Wait, you could do that?”

1 / 0
• China
Stay as informed as our CFO
Sales and store count, year-over-year growth, P&L, and other key data of one of the world’s fastest-growing and most transparent pizza chains
Please review our privacy policy before subscribing