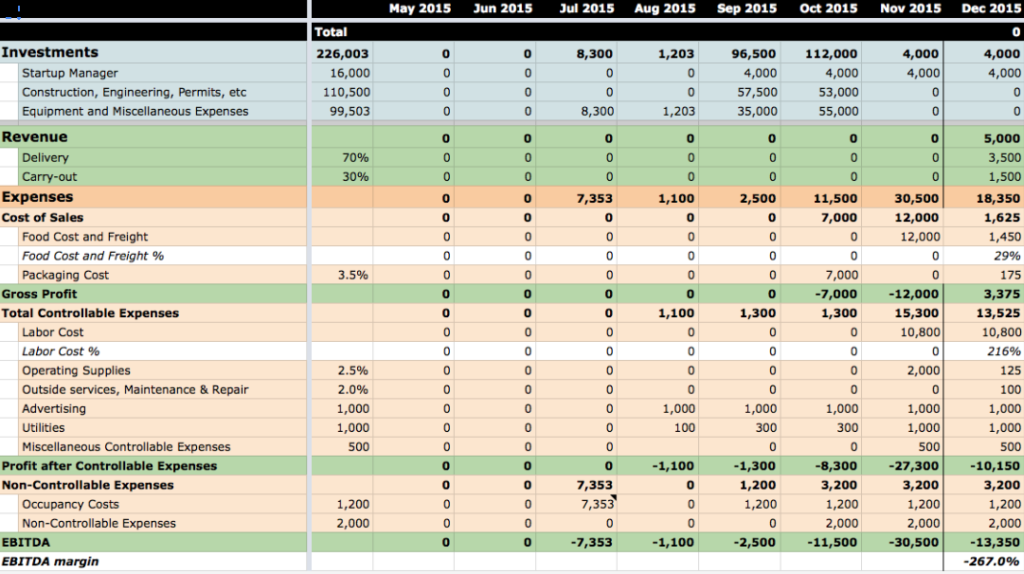 Our business plan for the first US pizzeria

So, we want to open a pizza delivery. How much dough will we need? Let’s start by answering this question from the end—imagine that distant but bright and cheerful future where our ultimate goal has been reached and at last we have a pizzeria in Oxford. It’s built, it’s open, it’s popular, and it’s profitable. Wow. But what exactly will it look like in terms of numbers? A good business plan could answer that question. Why can’t we have one?

Using a simple technique, we calculated the average monthly revenue of a Papa John’s pizzeria in Oxford and learned that they make around $82,000 a month. Being modest, we assume that Dodo Pizza Oxford will make $60,000.

Since we already have just shy of 50 pizzerias in the Dodo Pizza chain in Europe, we are pretty familiar with the business and can easily sketch out the list of monthly expenses. The easiest part—the cost of occupancy. For us it’s only $1,200 per month, which gives us an opportunity to have low non-controllable (fixed) expenses.

Bottom line—if we do a good job, we should earn a profit of around $16,000 a month, which means that our EBITDA will be around 26,5%. You can examine our business plan for a pizza delivery here.

But wait a minute. You can’t even dream of having these numbers in the beginning. We expect to hit $60,000 in sales in 2 years (when making a business plan, it’s always a smart thing to lower your expectations).

For a Dodo Pizza restaurant in Russia, it usually takes around 6 months to achieve the break-even point (the point at which expenses and revenue are equal). We should be less optimistic in forecasting sales and expenses for the first store in the US because of our new pilot concept and fierce competition in the market. So we’ve set the break-even point to be reached 8 months after the grand opening of our pizzeria. We’ll lose money every month before achieving the break-even point. Therefore, $125,000 is aimed at covering those losses plus some other expenses. But that would be the smaller part of our investment, since we have to renovate the building and buy equipment (which is pretty expensive).

Papa John’s claims that the average cash investment for a domestic traditional company-owned restaurant in 2014 was $283,000, excluding tenant allowances (see Papa John’s Annual Report, 2014). A typical traditional domestic Papa John’s restaurant averages 1,100 to 1,500 square feet. That’s almost twice as much as we rented for our first Dodo Pizza in Oxford. Does that mean that we’ll need only half of the sum, around $140,000? Unfortunately, it doesn’t.

You can’t apply simple math in such cases. The market leaders have the best prices due to the economies of scale. They pay less for the equipment because they buy tons of it. Besides, we are new to the market and will probably make some mistakes that will also cost us some money.

So we’ll have to spend more cash for 1 square foot. But how much more? We can’t know for sure. Right now we are planning to invest around $110,000 in construction and $100,000 in equipment. We’ll also have to spend around $16,000 on salary for our startup manager during the startup stage. At last, we have the answer.

Is that the right answer? We don’t know yet. The biggest risk in our project is our cost of sales. We’ve set a goal to sell an artisan product at fast-food pizza prices. But the best ingredients in the market cost a fortune, which drives the cost of food up enormously. We’ll have to find a way to manage that and keep our food cost at the 25% level. That won’t be easy to accomplish, even though fast-food pizza chains usually have a food cost around 21-23%.

Some people say that writing a business plan is like making a New Year’s resolution to yourself—inspiring, but useless. There have been no cases in the history of entrepreneurship where everything happened as it was planned. It already looks like Dodo Pizza Oxford’s case won’t be an exception to the rule. But that’s going to be the topic of our next post.