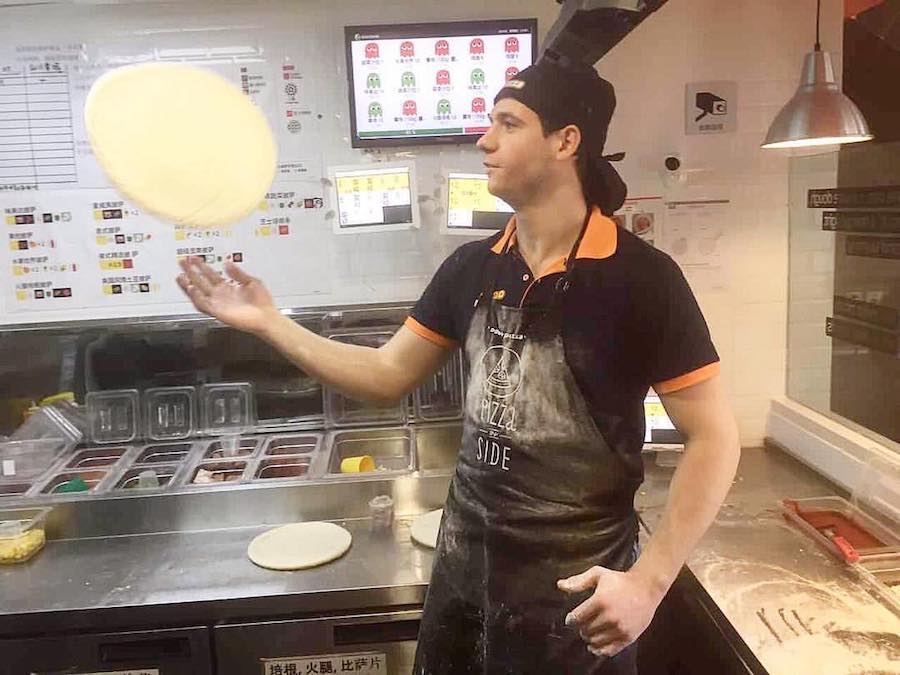 Denis Chernobaev says that his world has turned upside down since he got a new job. That job was nothing fancy: Denis became a pizza shop manager. Not that much of a career move for a guy who used to work at Mars and enjoyed all the office perks such a legendary global company can offer. I hopped on a call with Denis to chat about why he traded Mars for Dodo Pizza — and what an office manager can learn if he becomes a person whose job is to follow the office’s orders.

For you, getting a job at Mars wasn’t easy: you took part in the company’s program for young leaders and was chosen over six hundred other contestants. Three years later you quit Mars and started working for Dodo Pizza. Why?

I still believe that Mars is probably one of the best corporations in the world. But at some point, I realized that I didn’t want to work for a corporation anymore. I aimed to join a startup. I wanted to take bold risks, be challenged beyond reason, create something meaningful, be personally responsible for my successes or failures. Dodo Pizza offered me all that.

You joined Dodo Pizza a year ago. Was it the plan from the beginning that you’d be managing just one pizza delivery—instead of managing some big-scale important project at Dodo’s fancy headquarters?

Actually, my first assignment was China. I had to help our two first partners bolster their sales, then open our first corporate store in Shanghai and start growing a franchise chain. Half a year later, we realized that the company had too much on its plate in our home market and wasn’t ready to grow that fast in China. So we decided to shelve the massive China expansion for a while. At the same time, it became evident that I lacked some critical skills and didn’t have a deep understanding of our business. Unlike some other managers, I had never worked in the field for real. I was drilled at our training center and went to gemba regularly, of course, but it wasn’t enough. So our CEO offered me to join one of our corporate pizza shops in Moscow as a general manager for about a year—and learn the ropes.

That happened in August, correct? And how is it going so far?

To be honest, it’s been tough. Usually, it takes about a year to learn everything you need to know to be a general manager. In Russia, the fastest ever case in Dodo Pizza history was half a year—from joining the company to becoming a GM. But that was before me: I had only a month before taking the largest part of the responsibility for our first corporate store in Moscow. I’ve been working 24/7 being under immense stress and constantly fearing that I would screw up. And I did screw up more than once, though I managed to clean up my mess without doing any significant harm. I have lost 6 kilograms.

Do you regret that you’ve agreed to take this gig?

Not at all; it’s been hard but awesome! I’m thrilled—and grateful. Because basically, the company decided to invest in my training. I’m learning a lot. My view of our business has changed dramatically. I’d say that a few months before, as an office manager who paid attention to what was going on in the company, I still had only 10% of the real understanding of our business. Now I think it’s about 50–60%. And the number is growing every day. I know how things really work. I better understand why they don’t work sometimes.

For different reasons. For example, some time ago the guys from the office decided that we needed to install branded roof toppers on our drivers’ cars as soon as possible and started pushing this idea very actively. The problem was that at the moment our pizzeria was growing rapidly, and for us, the main challenge was to hire and train new members of the team fast enough to support that growth. Hiring reliable drivers was particularly hard. And since they deliver in their own cars, many of them were reluctant to install the toppers out of concern that these things might damage their cars. It made our situation even worse than it was. But the office simply didn’t want to take these complications into account.

Maybe they were right and you were just developing Stockholm syndrome? Roof toppers are a must-have if you want your brand to be recognized.

I believe that you need to strike a balance between your strategic moves and the real situation in your kitchens. When you sit in the office and spitball ideas, everything looks simple. When you work in the kitchen, you realize that in retail, nothing is simple. Every—even meager—innovation needs to be thought out down to the smallest details. The idea of roof toppers wasn’t bad. The timing was bad.

Have you shared your wisdom with the guys in the office?

Whenever something goes wrong, I now give feedback to the manager responsible for the innovation. I also notice a backward trend: they sometimes come to me with their ideas, asking if these ideas could work or not. And they go to gemba. But to be honest, it doesn’t happen as often as it might have.

Now I understand that there is always a chasm between the office and the chain—between the people making rules and the people following them.

They are at odds by default. That’s why every office manager has to go to gemba regularly and do as much as he/she can to narrow this chasm. It’s the only way to make truly great products. If you are working on an interface for the cash desk, you should work as a cashier at least for a few hours every week—not once a year during a Director’s day at Dodo Pizza.

You mentioned that pizza shop sales were rapidly growing; why is that? Moscow is a new, highly competitive market for Dodo Pizza. Historically, it’s the turf of our friends from Domino’s. Some of our partners struggle here. Why is the only thing you’re struggling with to keep up with the demand?

We’re employing a systematic approach to our marketing, doing dozens of things every day. Does every driver hand out our leaflet every time he makes a delivery? Is there info about the latest deals on every table in the dine-in area? These small things matter. And this approach should be applied everywhere. You can hire a dozen promoters to give away leaflets at a subway station—and get a few sales or a hundred depending on how well you manage these things. When our team realized that we were struggling with hiring, we focused on the problem, studied every step of the process, and found a way to improve it. And it wasn’t me, by the way, it’s the team. Of course, we make sure that our product is always excellent and service is top-notch. We pay attention to every piece of feedback or complaint we receive. The systematic approach is the only solution in the retail business. Our results prove it: despite competition and some gloomy predictions about Dodo’s future in the capital, now our pizza shop is the second most successful Dodo Pizza in Russia—among pizzerias opened less than a year ago.

I believe that we can grow two times in sales and set a new chain record, which for now belongs to our partners in Samara. In November, their third pizzeria saw $145,009 in monthly sales. I’m sure that in the capital we can do even more. So we’ll continue working on marketing and building our team. I’ll stay here for as long as I’m needed. I’m always ready for a new challenge though and hope that someday, we’ll be ready to get back to the China market—and cause some racket there.

[big_small_image image=“14900” description=“Denis giving a speech at Dodo Meetup 2017. The slide says: stupidity and courage, or how we’re conquering China”]

team
Stay as informed as our CFO
Sales and store count, year-over-year growth, P&L, and other key data of one of the world’s fastest-growing and most transparent pizza chains
Please review our privacy policy before subscribing