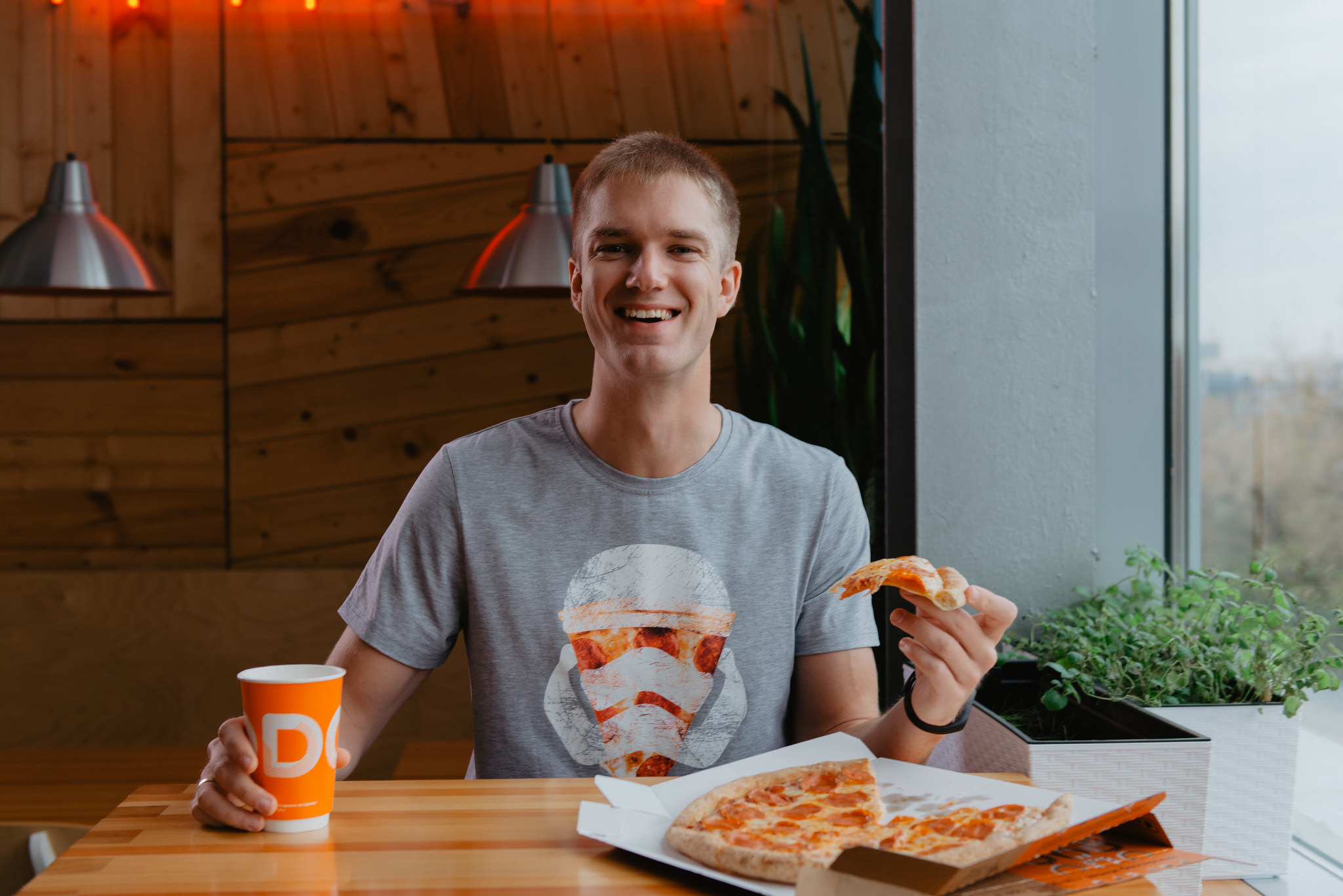 If you are our customer, we want you to trash us. Was your pizza a disaster? Say it. Waited for eternity? Say it. Did we mess up your order? Say it. You think we’re idiots? Please, say that too.

Negative feedback is pure gold for our business. It allows our team to learn from mistakes and grow. And as with any precious resource, this gold is hard to come by—harder than many people think.

Most customers don’t like giving negative feedback. Because it’s not fun. They don’t want to look like jerks—they just keep their thoughts to themselves and simply never return to us again.

And even those who don’t have any problem with being upfront often don’t have the time to comment on our subpar performance. They buy dozens of products and services every day. Giving feedback on every transaction they make isn’t humanly possible.

So as strange as it sounds, we do feel that negative feedback should be encouraged in our customers. And we as a brand have to provide them with cool tools for lodging their complaints. Giving feedback on our service should be super-duper easy.

What we at Dodo Pizza have learned recently is that mobile channels can make a real difference here.

Earlier this year, we decided to implement a new feature in our mobile app which will allow any customer to rate their order in just a tap. The feedback will be sent to the pizza shop management directly so they can rectify any mistake. Our grand vision is even bigger.

Our mobile app is a real hit. In Russia, it was downloaded more than 3.58 million times. Now the app brings us around 34% of all sales.

If we do the feedback feature right, we’ll be receiving enough data to create a representative quality ranking for any pizzeria in our chain.

Any apartment listed on AirBnb has a ranking, as do the drivers on Uber. We aimed to introduce something similar. Launching an open pizza shop ranking based on the feedback collected via our mobile app was even named one of our five key projects for 2018/2019.

So we got to work. Keeping in mind that giving feedback should be easy, our designers created a pretty straightforward interface. 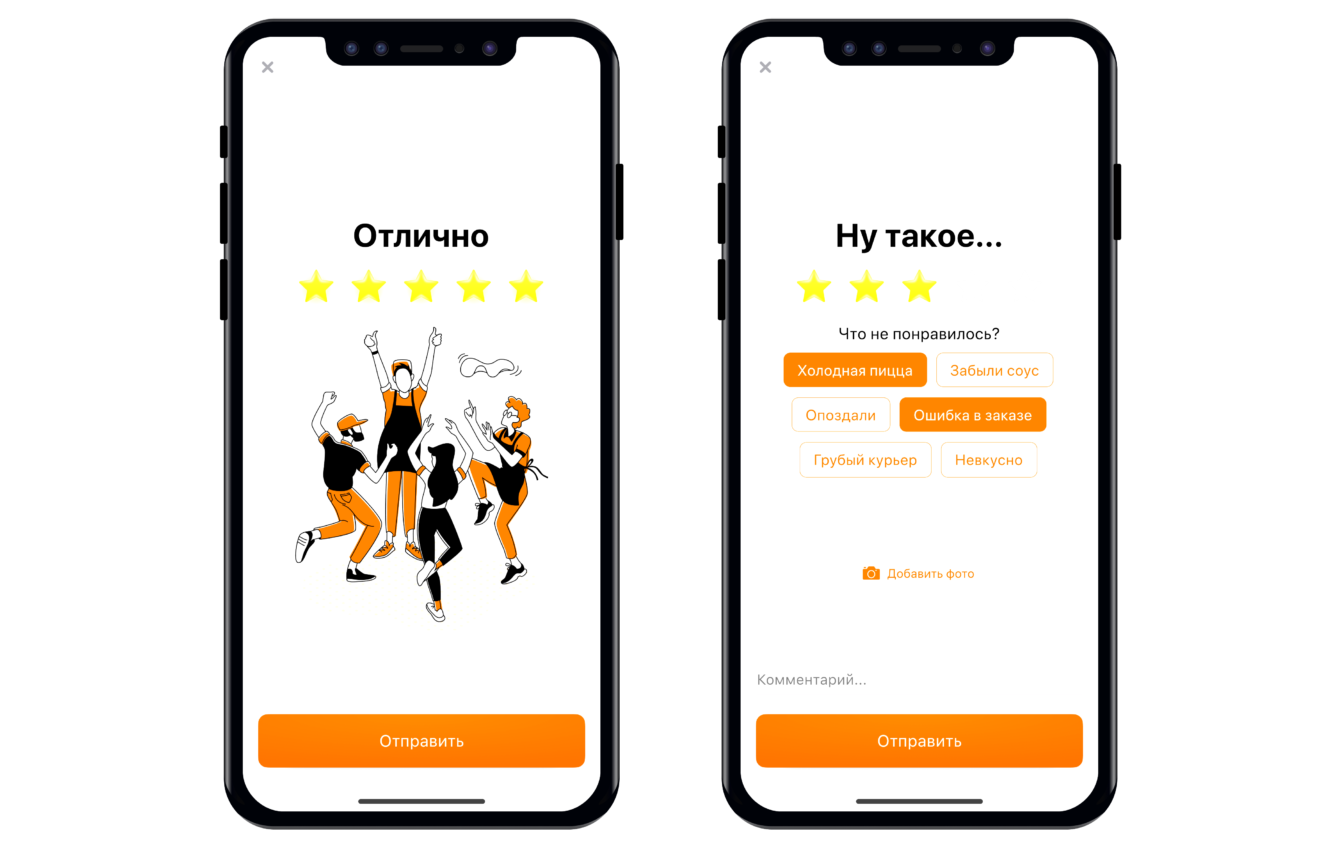 Customers receive a notification which prompts them to rate their pizza. They can evaluate their order giving it one to five stars. If their choice is less than five stars, we show them a few buttons to tap on that represent the most popular complaints. So in many cases they don’t even need to write anything. There is also an option to leave a comment and attach a photo.

After we implemented this feature in the app, we switched it on for 15 pizzerias in three cities in Russia (Moscow, St.Petersburg, Syktyvkar) for a one-week test.

We received 1839 reviews out of 4362 mobile orders. The conversion is pretty good as it is, but we have to keep in mind that this new feature was available only for the customers who upgraded their app to the latest version, and not all people keep their apps up-to-date. So we can stipulate that even more than half of the customers (with up-to-date apps) seized the opportunity to rate their pizza.

4.40 doesn’t look that bad only until you learn that it means that a quarter of customers didn’t give the pizzeria five stars.

Among the most popular complaints: not tasty pizza (2.45%), late deliveries (2.34%), and mistakes in orders (2.12%). Here we haven’t seen anything new and groundbreaking, but... The quantity of complaints we received was groundbreaking indeed.  For now, our contact center is the main channel to register negative feedback.

We know from experience that out of all orders, around 1% tend to end up with a complaint call. In the app, more than 7% of all orders received a negative (1 to 4 star-) review.

And this feedback is much more nuanced. Nobody would bother to call us to report that the crust on their pizza was burned slightly more than it’s allowed even for an artisan pizza. With our app, it can be done with a couple of taps. The lack of human contact probably also contributes to the increase in complaints.

The more we get them the better, so our team is really inspired with these results. We have a feeling that the development is on the right track.

Next to do: roll out our killer feature for the entire chain, set up a proper workflow for rectifying our mistakes, and start building open ranking based on the reviews.

Subscribe to our newsletter below and we’ll keep you posted.

Dodo IS marketing
Stay as informed as our CFO
Sales and store count, year-over-year growth, P&L, and other key data of one of the world’s fastest-growing and most transparent pizza chains
Please review our privacy policy before subscribing