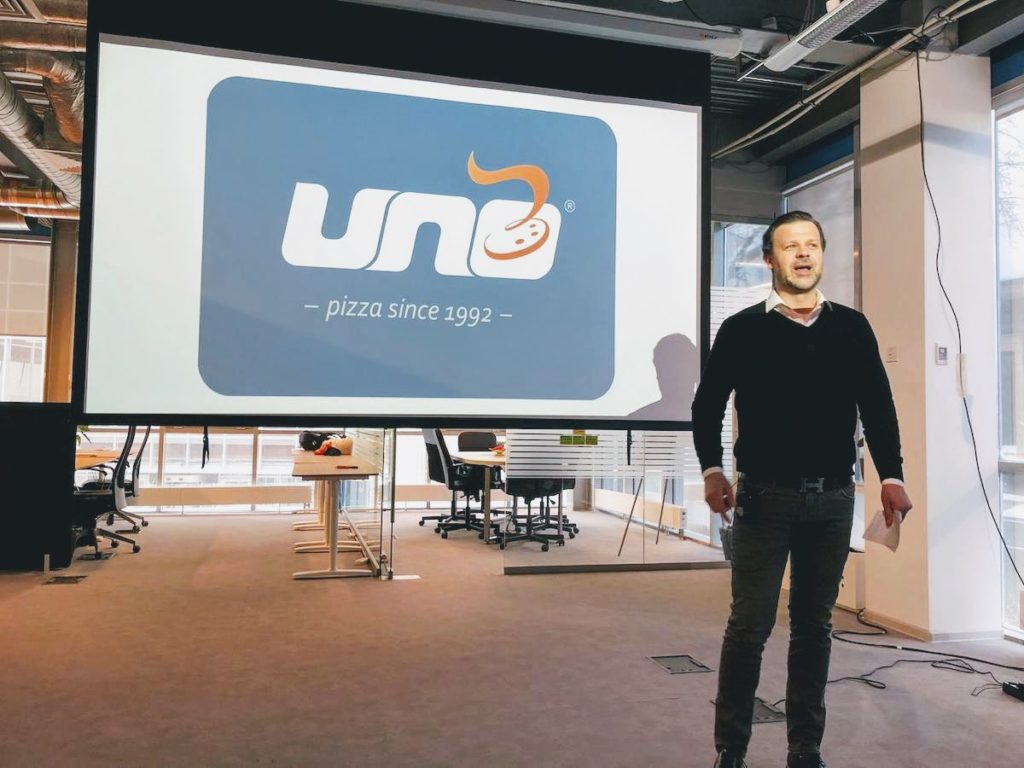 The Papa John’s Russian master franchisee has acquired Uno Pizza, the German pizza chain. Uno Pizza has 13 restaurants in Germany. Their pizzerias will be renamed as Papa John’s; they will be the first Papa John’s pizzerias in the German market.

“We are very happy to become a part of the Papa John’s team,” said Thomas Kochmann, the Uno Pizza cofounder. Christopher Wynne, the majority stakeholder and CEO of Papa John’s Western and PJ Germany, confirmed.

To be honest with you, this news was a total surprise for us. Early last year, we announced that Uno Pizza would become the Dodo Pizza master franchisee in the German market. The proposal came from the Uno Pizza founders, brothers Thomas and Michael Kochmann. They contacted us first and offered cooperation. We invited them to Moscow, where they got acquainted with our system, pizzerias, and the team. Then we visited Germany, where an agreement regarding terms and provisions of the project launch was reached; we shook hands and signed the letter of intent.

According to our agreement, the project should have started in the summer of 2018. The story about German entrepreneurs who chose to collaborate with a Russian company spread all over mass media. Even Bild wrote about it. We at Dodo Pizza got to work. We gave Uno Pizza access to our in-house Knowledge Base and, at the brothers’ request, let them use our promotional materials and products for Uno ads in Germany.

Two months after we’d signed an agreement with our new partners, Thomas Kochmann wrote to me that Christopher Wynne, the co-owner of the Papa John’s Russian master franchisee, wanted to contact them and was interested in Papa John’s expansion in Germany. I wrote back that I didn’t mind their meeting and trusted Thomas completely.

And after that, some communication breakdown happened. The Coca-Cola company, one of the key sponsors of the FIFA World Cup, had given us tickets to the World Cup Final in Moscow. We wanted to invite the Kochmann brothers here so that we could discuss our joint plan in detail and also go see the final match, as they were both soccer fans. We asked for their passport details, but Thomas stopped answering our letters or WhatsApp messages. I sensed that something had changed. In business, Dodo Pizza adheres to the principle of total openness with our partners, so I wrote Thomas openly (here is the cursory translation of my letter; originally it was in German):

Sorry to bother you again. I’m looking forward to hearing from you and Michael about the World Cup final. I’d like to mention that these tickets are not obligatory. They were given to us by the Coca-Cola company; we’re their major customer here in Russia. I knew that you like soccer, so I wanted to invite you, and I did that with all my heart. Coca-Cola is waiting for the passport details of the guests so it can make a reservation.

Thomas, as I said, in our business we prefer openness, so I’m going to say what I think. Perhaps Papa John’s is preparing an offer for you. And we don’t mind it if you prefer to partner with Papa John’s or sell your chain altogether instead of developing it with Dodo Pizza. This is business. You should choose what’s best for you. We’ve spent some time on this project, but that time hasn’t been wasted; I think we have all learned a lot. It’s true we’re not ready to move quickly, we need time, but that’s because we have high quality standards. We understand that our joint project is a great responsibility. I sincerely believe that if you want to do something new in the market and you’re interested in the self-sufficient development of your business, then Dodo Pizza is best for you. If you want to mitigate your risks or just hold on to your success of the last 25 years, then it’s best to choose Papa John’s.

Maybe I’m mistaken and you’re not even thinking about it. I’m speaking straight and looking forward to your answer. As I said, we will respect whatever decision you make. And of course, we hope we’ll get a chance to grow together in Germany. I’ll do my best for this project to succeed.”

After a while, Thomas wrote back that everything was fine and sent their passport details. The Kochmann brothers came to Moscow, we went to the World Cup final, reconfirmed our intentions and agreed on detailed cooperation plans. So I forgot all about Papa John’s.

Then the Kochmann brothers announced that they needed investments for their current pizzerias’ rebranding and that they were ready to sell a share to an investor. We offered our help; then, together, we prepared an investment proposal and found potential investors. Nobody could come to an agreement with the Kochmann brothers, though. The problem was, besides investments in their business development, they wanted a big cash-out—all terms and conditions were specified in the investment proposal—and potential investors were taken aback by this.

And yesterday, I read that Papa John’s Russia had bought Uno Pizza. Obviously, the Kochmann brothers were in negotiations with them for some time now, while maintaining their relations with us. Our conclusions? There’s none in particular. All conclusions were drawn long time ago. Different people run their businesses differently, and mistakes are inevitable. We are still going to be absolutely open with our partners. We are still going to trust them. This attitude involves risks, but it lets us find our real partners, and it’s a winning long-term strategy. For us, business is not a cunning game or politics; it’s partnership. That’s our way, and we believe in it; it unites entrepreneurs from different countries and cultures. I don’t judge the Kochmann brothers, not in the least. It’s business, it’s nothing personal. They are simply not the partners for us.

I congratulate Thomas and Michael Kochmann on their deal and cash-out and wish Christopher Wynne and Papa John’s Russia the best of luck in Germany!

• EMEA
Stay as informed as our CFO
Sales and store count, year-over-year growth, P&L, and other key data of one of the world’s fastest-growing and most transparent pizza chains
Please review our privacy policy before subscribing