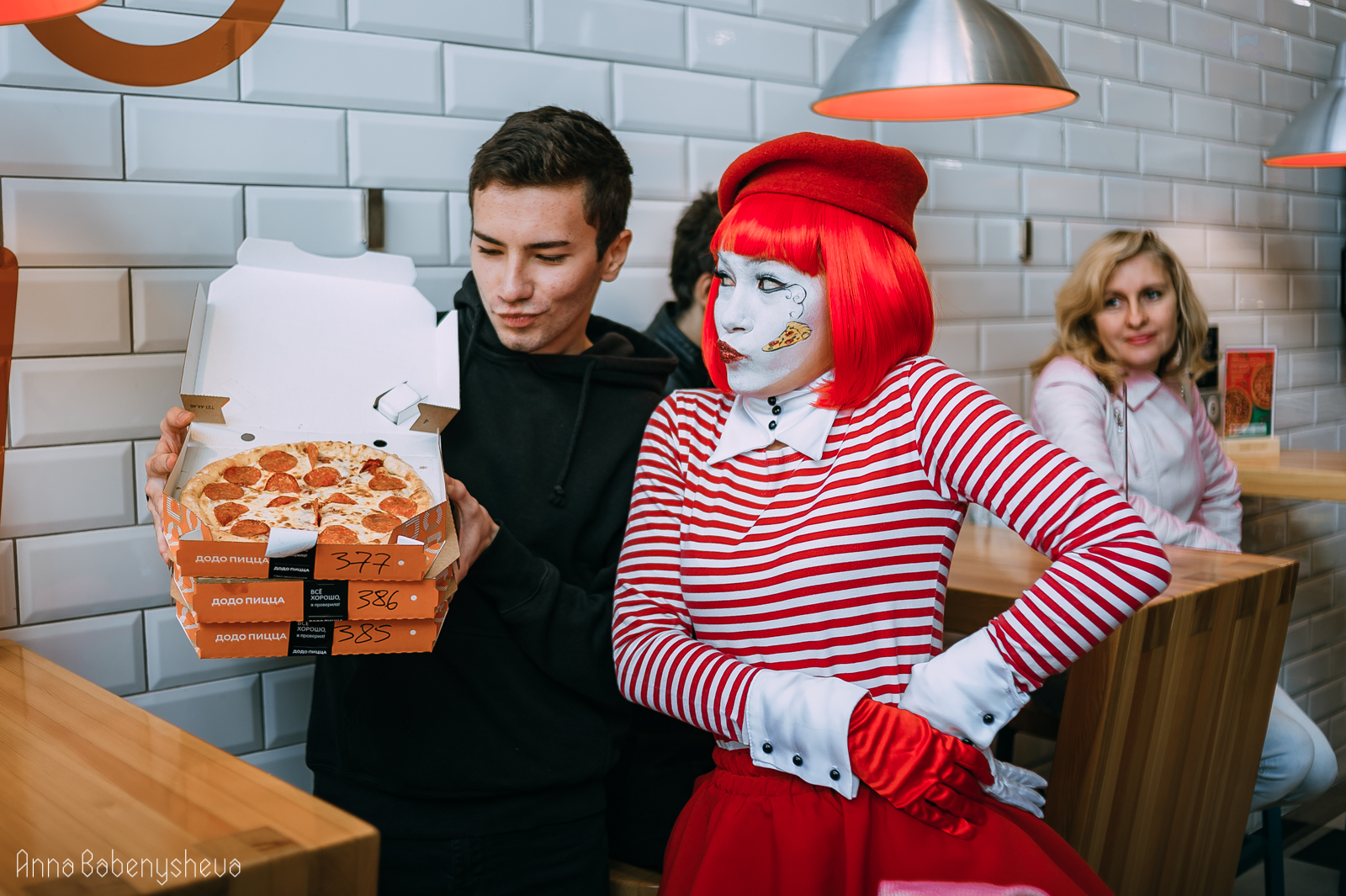 This is a translation in English of an article about Dodo Pizza written by Benjamin Bidder and published in Germany on January 28th, 2019 by one of the country’s most established magazines: Der Spiegel. Though this piece doesn’t necessarily represent our point of view, we share it as it is, without any alterations.

What unites an ex-investment banker from Merrill Lynch, some top Russian programmers formerly employed by Intel and a marketing expert from Poland? They’ve joined forces in a start-up office on the outskirts of Moscow—and they’re making pizza. A lot of it.

Working out of a brick building on the site of a former Soviet boiler factory, the Dodo Pizza team has 130 employees: among them are young marketing and finance experts and—somewhat unusual for a fast food chain—more than 70 programmers.

From its base in Moscow, the company is expanding into new markets. When a crackle comes over the office tannoy, staff know that Aliona from reception is about to announce the opening of another Dodo Pizzeria. The tannoy crackles pretty frequently: since 2012 the number of outlets has increased from eight to 442. More than 100 have opened in the past 12 months alone.

From Saxony to California

If the new branch is located abroad, Aliona plays a song from that country ahead of the announcement. Sometimes it’s a song from Romania (six outlets) sometimes one from Belarus (ten outlets). In February, Dodo plans to open in Los Angeles, and Aliona’s already got California Dreaming in mind.

Dodo Pizza’s most important market is Russia, but its chain of outlets spans 11 other countries, from China and Kazakhstan to Estonia as well as a couple of gateways for expansion into western markets: one outlet in the British seaside resort of Brighton as well as three in the US, in the Memphis region.

The company is now set to enter the German market. The German chain Uno Pizza—which currently has 14 outlets in Saxony and Saxony-Anhalt—is joining the Dodo family as a franchise partner. According to owners Thomas and Michael Kochmann, they plan to open 25 more outlets within the next five years. It looks like German music will be playing over the tannoy in the Moscow office at least once before the end of 2019. “Maybe Rammstein,” says Dodo founder Fyodor Ovchinnikov. Rammstein is the best-known German band in Russia, aside from Modern Talking

IT is at the company’s core: all new outlets are connected to its operating system Dodo IS. The programme processes each order within seconds. In Dodo pizza kitchens from Siberia to Tennessee, iPad screens light up with the correct recipe and instructions for the chef. If the pizza is ready in time a fanfare sounds though the kitchen. If it’s taking too long, a greedy Pacman monster appears on the screen and starts gobbling the pizza. The idea behind Dodo IS is to make the operation and management of a fast food pizzeria simple and intuitive, like a computer game.

There’s an almost disturbingly radical focus on transparency. Video cameras are installed in all Dodo kitchens, broadcasting over the Internet around the clock. Customers can inspect levels of cleanliness at any time of day. Dodo Pizza also publishes the revenues of every single outlet online, in order to stimulate more competition. Presentations of new projects and ideas are posted immediately on YouTube. The company wants the competition (the international chains Papa John’s and Domino’s) to see all of this. It’s intended to motivate the teams to implement new ideas more quickly.

A new generation of Russian entrepreneurs?

It was actually bankruptcy that led Ovchinnikov to set up the company – whose more than 400 outlets now generate an annual turnover of 220 million dollars. He studied archaeology in Syktyvkar, a provincial town in the far north of Russia, a good 1000 kilometres north of Moscow. He opened a chain of bookstores, which went into administration during the financial crisis.

How did he get from books to pizza? He dreamt of creating a global company in a sector where he could utilise Russia’s strength in IT. “Pizza is perfect: a mass market and largely standardized product, already found all over the world. Whether it’s in India, Brazil or the US, everyone likes pizza,” says Ovchinnikov. But heavy investment in the operating system will only pay off once “we play a global role,” he adds.

To date, Dodo has spent a billion roubles, or 15 million euros, in web platform development alone. These costs almost brought down the whole project. Ovchinnikov went to banks and venture capital firms “but none of them believed that a Russian company could have global success if it wasn’t exporting oil or weapons.”

On top of this, investors in Russia tend to think in short timeframes. They expect companies to offer a return on investments within two to three years – because they’re always worried that the situation in Russia will change. “Here nobody believes in long-term projects,” says Ovchinnikov.

Not lenders, at least. So Ovchinnikov launched a crowdfunding campaign via his blog, where he found private investors who each invested sums of between 5000 and 200,000 dollars in start-up funding. Many of the new franchisees opening Dodo outlets in Russia have also been recruited from this blog community.

For pizzeria owners and managers, they have an unusual range of CVs; among them are graduates, web designers and even a former professional poker player.

For many young people in Russia today, starting your own business is one of the few effective “social elevators,” says Ovchinnikov. It’s an opportunity for upward mobility that proves that it’s possible to succeed outside the state-owned industrial conglomerates or the security services. “We’re living a kind of Russian Dream,” says Ovchinnikov, alluding to the “American Dream.”

A target for the security services

When Fyodor Ovchinnikov is asked why he gave his pizza chain the name Dodo, he talks about “Alice in Wonderland,” the story he loved as a child. “We’re just as naive as the dodo in the book. We trust our customers, suppliers and partners,” he says.

Naivety can be dangerous in Russia. The company’s rise has evidently caught the attention of Moscow’s security services; circles that sometimes deploy the methods of the mafia whom they are supposed to be fighting. A bag of drugs was planted in a Dodo outlet on the outskirts of Moscow. Both the franchise owner and Ovchinnikov himself were summoned to appear before court.

The allegation was that the chain merely acts as a front for a thriving drug business. The authorities demanded detailed information about the company, who had registered which subsidiary, about Dodo Pizza’s corporate structure. For Ovchinnikov, this indicated that somebody wanted to take the company off him, or at least obtain a stake in it – a widespread problem in Russia.

Dodo Pizza went public with the case. Ovchinnikov has given interviews. Transparency, he says, is also the best defence. He was asked whether he wouldn’t be safer living abroad. “There is a level of rottenness in our country, but there are also many respectable people. What message would I send to the investors, to the companies, who all believe that it’s possible to build an honest business? I was born here and I’m not leaving,” he says.

It wouldn’t be easy to take the company away from him. “It’s not an oil well, but a complex structure,” he says. He has not received any more letters from the authorities in the past few months. Are the problems over? Ovchinnikov hopes so. “But in Russia, you can never say whether it’s over or not,” he says.

• EMEA key posts press
Stay as informed as our CFO
Sales and store count, year-over-year growth, P&L, and other key data of one of the world’s fastest-growing and most transparent pizza chains
Please review our privacy policy before subscribing